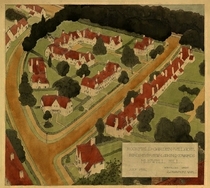 'Rookfield Garden Estate - a study of the influence of the Garden City' by Anne Trevett is an article in No 29 of the Hornsey Historical Bulletin, 1998 but we have not found it on-line. Some architectural drawings are given in Local History.

A planning document at Haringey: has a very informative section that we give below, however it consistently refers to the father as C.J. whereas all other sources give his first names as William Jefferies so we think they have that wrong. Here it is:

C.J. Collins was a successful builder/developer who was very active in the area and he was responsible for several developments there before moving on to Southampton. His two sons, Herbert and William, joined their father’s business starting at the bottom as carpenters and attending evening classes in architecture. Herbert lived at 31 Rookfield Avenue from 1909 to 1922. As a young architect he had been involved with the group responsible for setting up Welwyn Garden City which was started in 1920. C.J. Collins moved to Southampton in 1912, leaving his sons to complete projects in the Hornsey area. ‘In 1899 C J Collins bought 23 acres of land at the foot of Muswell Hill and by 1901 the Rookfield Estate had been planned. At the time he was living at Fortismore and in 1900 he bought Rookfield which had been owned by A.W. Gamage, the owner of the department store of that name. The OS Map of 1896 shows three houses on the slopes which became the Rookfield Estate: these were Avenue House, Rookfield and ‘Lalla Rookh’. The last of these had a drive from beside the Victoria Public House at the foot of Muswell Hill which is the line of the existing spur of garden behind Hollywood Cottage. A small building is shown in approximately the location of the smaller eastern block of existing garages. An equivalent map from 1913 shows the development of Etheldene Avenue having cut off that drive with access to Lalla Rookh shown to be provided from the drive into Rookfield from Muswell Hill. ‘The building of the Rookfield Estate started in 1906 at the northern end of Rookfield Avenue and was the responsibility of Herbert Collins between 1906 and 1911 with a series of asymmetric villas which are described by Pevsner as being of Baillie Scott derivation. Etheldene Avenue was already established and is a conventionally straight road with narrow terrace frontages detailed in the Shaw tradition with casements and tile hanging. In the early stages the Rookfield Avenue houses were designed with garages.

William Collins established the Rookfield Garden Village Company in 1912 and built  Cranmore Way and Rookfield Close which were completed in 1915 after the demolition  of the family home Rookfield House. The flats in the close bear the date of 1915.  Cascade Avenue, numbers 1-29, were completed by 1922. The wide grass verges  which make a significant contribution to the character of the Estate did not comply  with the bylaws at the time and prevented adoption of the roads. By this stage  William Collins wanted to avoid the visual impact of the growth in private cars and  provided 32 garages on the land between Cranmore Way and Etheldene Avenue. It is clear that the boundaries of this land were established simply by virtue of the back boundaries of the properties in the adjoining roads. Apart from any visual considerations this was clearly a good commercial decision since the only other use for; this land would probably have been to provide deeper gardens to the adjoining properties. There are more garages constructed in the Cascade Avenue and the Chine part of the estate. ‘Rookfield House and Lalla Rookh were supposedly demolished by about 1913 although they do still appear on the 1920 OS map."

This section lists the memorials where the subject on this page is commemorated:
Rookfield Garden Village

{On the small plaque:} To mark the centenary of Rookfield Garden Village Ltd ...

Master builder, Born Kingston upon Hull, where, after training he set up a bu...

Founded in the 1880s by Angela Burdett-Coutts.

Possible original owner of what was to become Palingswick House.