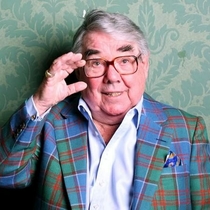 Actor and comedian. Born Ronald Balfour Corbett in Edinburgh. His career started in the theatre, particularly in cabaret with Danny La Rue. He came to national fame in BBC television's sketch show 'The Frost Report', where he was teamed up with Ronnie Barker. They eventually appeared together in the immensely popular 'The Two Ronnies', which ran for sixteen years. He had lived in Croydon for many years and died in the Shirley Oaks Hospital, Croydon.

This section lists the memorials where the subject on this page is commemorated:
Ronnie Corbett

Make-up artist. He worked on some of the most notable films of the 20th centu...