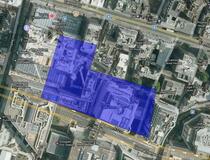 Londonist, our Picture source, have a good post on this. They write: "Underneath Cannon Street station is an enormous building that dates to around the late first or early second century AD. It was once thought to be the Roman Governor's palace, but is now considered more likely to have been administrative buildings, though with its splendour you can forgive the earlier assumption. It was about 130m x 100m, reaching from Cannon Street to what would have been the waterfront at Upper Thames Street. Terraced on three levels, a series of larger (state?) rooms stretched from the eastern edge of the station – the walls probably help support the railway arches – to Bush Lane, with a further wing continuing to Laurence Pountney Lane. To the south of these rooms was a garden and, in a lovely touch, an ornamental pool 10m wide and up to 55m long, holding around 200,000 gallons of water. Picture the pool: with statues, probably some fountains and, beyond, a view of Southwark's marshes."

The nearby London Stone is thought to have once been part of this building.

This section lists the memorials where the subject on this page is commemorated:
Roman building at Cannon Street

The archaeological remains of these Roman administrative buildings extend und...