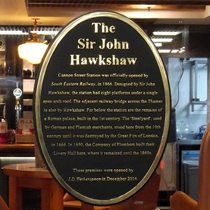 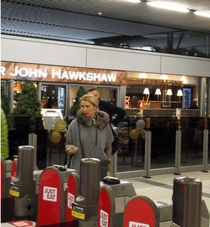 The Sir John Hawkshaw
Cannon Street Station was officially opened by South Eastern Railway, in 1866. Designed by Sir John Hawkshaw, the station had eight platforms under a single span arch roof. The adjacent railway bridge across the Thames is also by Hawkshaw. Far below the station are the remains is a Roman palace, built in the 1st century. The 'Steelyard', used by German and Flemish merchants, stood here from the 10th century until it was destroyed by the Great Fire of London, in 1666. In 1690, the Company of Plumbers built their livery hall here, where it remained until the 1860s.
These premises were opened by J. D. Wetherspoon in December 2014.

In our photo the plaque can be seen to the left of the four lamps.

This section lists the subjects commemorated on the memorial on this page:
Cannon Street Station

Londonist, our Picture source, have a good post on this. They write: "Underne...

Originally formed as a line running from London to Dover. Branch lines were l...

Civil engineer. Born in Leeds. Moved to London in 1850. He worked on canals a...

This section lists the subjects who helped to create/erect the memorial on this page:
Cannon Street Station

Seems very odd for the chosen illustration to be of a computer game.