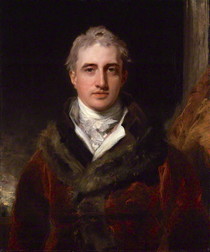 Politician. Born Dublin to a land-owning politician. Entered government in 1798, first in Ireland, and then from 1801 in Westminster. Secretary of State for Foreign Affairs 1812 - 22. 1821 became  2nd Marquess of Londonderry. 1822 began showing signs of nervous breakdown or madness and one day at his home in Kent he found a small knife and cut his own throat. A retrospective speculative diagnosis suggests syphilis.

Had a political falling out with a fellow cabinet member, George Canning, and challenged him to a duel. This took place on 21 September 1809 on Putney Heath. Canning, who had never previously fired a pistol, missed but was hit in the thigh. When the event was known they both resigned from the government.

Not a popular man, as instanced by Byron's ditty about his grave:
Posterity will ne'er survey
A nobler grave than this:
Here lie the bones of Castlereagh:
Stop, traveller, and piss.

This section lists the memorials where the subject on this page is commemorated:
Robert Stewart, Viscount Castlereagh

Margaret Doreen Eames was born on 8 February 1910, the second of the three ch...

Rebuilt on its traditional site, 1970.