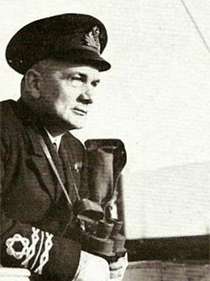 Sailor. Born Richard Been Stannard. During the evacuation of Namsos in April to May 1940, his ship, HMT Arab survived thirty-one bombing attacks in five days. On one occasion, he and two of his crew tackled a fire on a jetty, caused by a bomb igniting ammunition. Part of the jetty was saved, which proved invaluable at the subsequent evacuation. He was awarded the Victoria Cross. Died in Sydney, Australia.

This section lists the memorials where the subject on this page is commemorated:
Richard Stannard

Major George Blackburn Carpenter was born on 14 May 1917 in Townville, Crawfo...