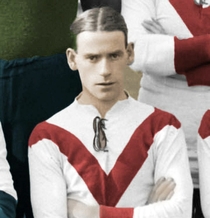 Footballer and soldier. Born in Cambuslang, Lanarkshire. He started his football career in the Northern League with Blyth in 1910, moving to Wallsend Park Villa. In May 1911, he joined Clapton Orient. In 1912 he rescued an 11-year-old boy from the River Lea, for which he received a medal from the Mayor of Hackney, and he later risked his life when rescuing a man from a burning building. At the outbreak of WW1 he joined the 17th Battalion Middlesex Regiment, the 'Footballers' Battalion'. He was promoted to the rank of Company Sergeant Major and was fatally wounded by a shell blast whilst leading his men near Serre-lès-Puisieux.

This section lists the memorials where the subject on this page is commemorated:
Richard McFadden