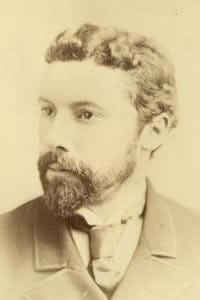 Theatre impresario. Born Greek Street. Suggested that Sullivan should work on Gilbert's "Trial by Jury" and staged the first performance in 1875. In 1879 D'Oyly Carte's Opera Company was formed and many other operettas followed. They were very successful, in America as well, and Carte created the Savoy Theatre which opened on 1881. He went on to build the Savoy Hotel which opened in 1889.

D'Oyly Carte, was also the booking manager for Oscar Wilde and employed him to publicise the 1881 Gilbert and Sullivan opera "Patience" - perfect casting since the opera was a satire on the aesthetic movement of which Wilde was an extreme example. The main character, Bunthorne, might even have been modelled on Wilde but Swinburne and Rossetti are also likely candidates.

This section lists the memorials where the subject on this page is commemorated:
Richard D'Oyly Carte

{Above a stylized picture of two performers:} Palace Theatre Built for Richar...

Plaque unveiled by Mike Leigh director of the 1999 film Topsy-Turvy.

Hotelier. Born Rosa Ovenden at Leyton, Essex. She started her working life as...