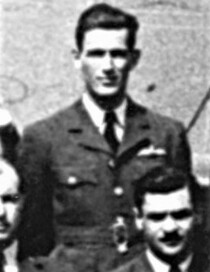 In 1941 he joined the Royal Air Force Volunteer Reserve as a Pilot Officer and was assigned to No.133 Squadron. On 26 September 1942 he was flying a Spitfire Mk IX aeroplane, serial number BS148, as one of the 12 aircraft of his squadron that were acting as fighter cover for an American B-17 daylight bombing raid in what became known as the Morlaix disaster. He turned back about 50 minutes into the flight because of engine trouble and was preparing to bale out because of fuel starvation when he spotted the English coast and was able to crash land in a field near Kingsbridge, Devon. He was critically injured, but survived his injuries. He went on to serve in the 336th Fighter Squadron of the United States Army Air Force with the rank of Lieutenant and was awarded the Air Medal and the Purple Heart.

This section lists the memorials where the subject on this page is commemorated:
Richard Beaty