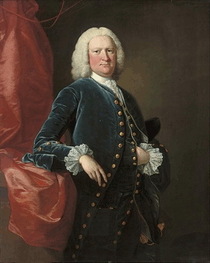 Son of Anne Thrale, sister of Edmund Halsey who took him into his brewery business, the Anchor Brewery.

Thrale.com tells this interesting story: "When Ralph took a wife in the early 1720's, he choose Mary Dabbins, whom his uncle was contemplating as a second Mrs. Halsey. The uncle seems to have accepted the situation without complaint at the time. On Edmund Halsey's death in 1729, eighteen years after Ralph Thrale started at the brewery, there was no mention of Ralph Thrale in his will."

So the brewery was inherited by Halsey's son-in-law Viscount Cobham, who sold it to Ralph Thrale who ran it very profitably 1729-58. Built a country mansion, Streatham Park, which gave its name to the area. Father of Henry.

This section lists the memorials where the subject on this page is commemorated:
Ralph Thrale

Whitebait were caught by this type of craft in the River Thames, until 1950. ...

Londonist tells us this restaurant was the venue chosen for the 1920 "the end...