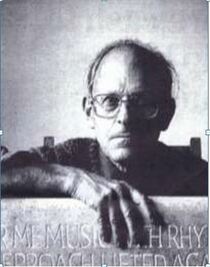 From Birkbeck :  "Sculptor, Ralph Beyer, who died in 2008 aged 86, fled from Nazi Germany arriving in England with his family in 1937 when he was 16 years old. His mother later returned to Germany during the war and was killed in Auschwitz. Unable to speak English, Beyer found work with the artist Eric Gill. After the War, he became friends with famous art historian Nikolaus Pevsner, who lectured on art and architecture at Birkbeck and who supported the commissioning of the sculpture. Beyer went on to become a famous artist in his own right."

Best known for his design and carving of the lettering in Coventry Cathedral. Amongst his works Wikipedia lists an inscription at the Royal Foundation of St. Katharine, Tower of London. We doubt it's this plaque but we are not aware of any other candidates. Listed also is a 1960 inscription at St Paul's Church, Bow Common, the large lettering in a lintel frieze around the outside of the entrance porch, which we had noticed and admired on our visits in the area.

This section lists the memorials created by the subject on this page:
Ralph Beyer

Artist local to Bloomsbury, active in 2013.