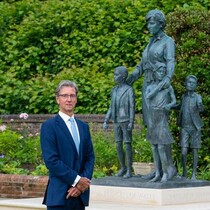 Sculptor. Born in Walton-on-Thames, Surrey. Personally selected by both Prince William and Prince Harry to create the memorial statue of Diana. He had previously depicted, the Queen, Prince Philip, the Queen Mother, often for coins. His website.

This section lists the memorials created by the subject on this page:
Ian Rank-Broadley

Sculptor. Born Blandford Forum. Spent most of his life and energy creating th...