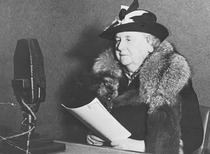 Queen (in her own right) of the Netherlands 1890 - 1948, the longest reign of any monarch of that country. From the Picture source website: "Following the Nazi occupation during the Second World War, the Dutch government in exile was granted air-time on BBC transmitters. The Radio Oranje program was a daily commentary. The Queen of the Netherlands, ... who was forced to leave her homeland, regularly appeared on the BBC and Radio Oranje, often calling Hitler the "arch-enemy of all mankind." Her late-night broadcasts on Radio Oranje, along with those of Winston Churchill, inspired the Dutch resistance."

Also in London during the war, King Haakon of Norway and De Gaulle of France similarly used the BBC to send popular messages of resistance back to their countries. The WW2 HQ of the Polish Navy was also based in London.

Churchill is quoted: "I fear no man in the world but Queen Wilhelmina."

This section lists the memorials where the subject on this page is commemorated:
Queen Wilhelmina

This section lists the memorials created by the subject on this page:
Queen Wilhelmina

Oranjehaven This building served as a club endowed in 1942 by Her Majesty Que...