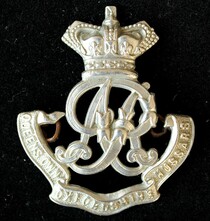 Yeomanry regiment which saw service in the Second Boer War with 40 and 59 Companies of the Imperial Yeomanry and also served in Belgium and France during WW1. In 1922, the regiment became part of the Royal Artillery. The lineage is maintained by 142 (Queen's Own Oxfordshire Hussars) Vehicle Squadron Royal Logistic Corps.

One of Winston Churchill's forebears was the lieutenant-colonel of the regiment, which in 1835, following a visit from Queen Adelaide became the Queen's Own Royal Oxfordshire Yeomanry Cavalry. Other Churchills maintained the family connection. 1888 it became the Queen's Own Royal Oxfordshire Hussars. Winston joined as a captain in 1902 and remained closely connected for the rest of his life.

This section lists the memorials created by the subject on this page:
Queen's Own Oxfordshire Hussars

Sailor. Born Victor Alexander Charles Crutchley in Chelsea. His mother had be...