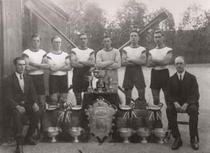 Formed at the Half Moon Hotel in Putney. In 1929 it moved to the small boathouse underneath the Dukes Head Hotel, Putney, which remained its headquarters until 1986 when it moved to an empty boathouse at Mortlake. 1992 this building was destroyed in a fire but, with Lottery funding, the club replaced it with a purpose-built clubhouse.

This section lists the memorials where the subject on this page is commemorated:
Putney Town Rowing Club

When we published this in January 2012 we asked for help in naming the sculpt...