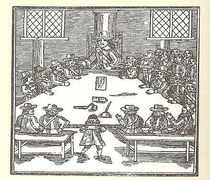 The significance of this event is that it is one of, if not, the first recorded public discussions of democratic principles, worldwide.

These debates were held to resolve disputes within the New Model Army, concerning: the extent of suffrage; the balance of power between the House of Commons vs the King and the Lords; an agreement on certain native rights, such as equality under the law.

The first day of the debates took place in St Marys Putney but subsequently the meetings were held at the nearby lodgings of Thomas Grosvenor, Quartermaster General of Foot. We can't determine where this was.

This section lists the memorials where the subject on this page is commemorated:
Putney Debates

Member of the Commissioners of the 1890 Bermondsey Library.

A local government district with borough status in Surrey, covering the towns...

Electred Speaker of the House of Commons in 1728, a post he held for a record...