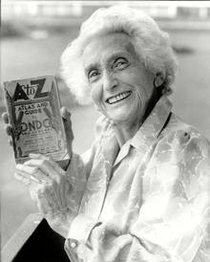 Map-maker. Born Phyllis Isobel Gross at Budapest, Court Lane Gardens, Dulwich. She said in her memoirs, that her inspiration for producing the London A - Z was because she was unable to find the location for a friend's party. The fact that she could have picked up a copy of her father's street atlas which had been printed some years before, seems to belie that. Her claim to have spent eighteen hours a day, pounding the streets of London, may also be down to her own self-publicity, debunked pretty thoroughly by her half-brother and others here.

She did however produce what has become the standard guide for getting around the capital (until someone invented the smartphone and put maps on it). A musical based on her life, 'The A - Z of Mrs P', was produced in London in 2014. Died at 5 Atlantic Court, Shoreham by Sea, Sussex.

This section lists the memorials where the subject on this page is commemorated:
Phyllis Pearsall

This is where she was born.

Sculptor of, and historian on, decorative ironwork. Also wrote on geology and...