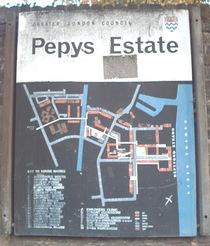 Built by the GLC, the Pepys Estate was opened by Earl Mountbatten. The section to the east of Grove Street stands on the site of the Royal Victoria Victualling Yard.

The excellent Municipal Dreams says " ... in 1958 ... the Admiralty agreed to sell the 11 acre site to the then London County Council for housing, principally for local people being displaced by the demolition of the run-down Victorian terraces which dominated the area. Clearance of the adjoining Grove Street and Windmill Lane areas created a 45 acre site on which eventually would be built around 1500 homes for a population of around 5000."

An information board reads "... The estate originally comprised of around 1,200 homes for local workers. The development was seen as a prestigious move forward in social housing, and a strong community spirit soon emerged. Even Queen Elizabeth II visited the estate. During her Silver Jubilee celebrations in 1977, Her Majesty arrived by river and climbed ‘Drake’s Step’s before meeting the cheering crowd of hundreds.”

The 26-floor Aragon Tower underwent a major renovation and in 2006 the accommodation, with another 3 floors, was sold off as luxury flats. It was claimed that this was necessary in order to regenerate the whole area but the locals were not convinced.

This section lists the memorials where the subject on this page is commemorated:
Pepys Estate

{Below a crown:} This plaque has been dedicated by the Pepys community in mem...

Toynbee Housing Association (which we guess is its new name) was created out ...