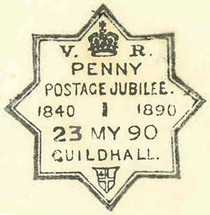 First established in London in 1680 by William Dockwra and his business partner, Robert Murray, operating only within the City of London, the City of Westminter and Southwark. From 1765 similar services were being set up in other populous areas.

From January 1840 letters could be sent anywhere in the UK for one penny. From May 1840 the cost of postage could be prepaid with the purchase of the first postage stamp, the Penny Black. In 1898 the Imperial Penny post extended the rate to the whole British Empire. The penny post rate ended in 1918. Prior to the uniform penny post the cost of sending a letter was based on the number of sheets and the distance travelled, and the recipient paid, not the sender.

Anthony Trollope’s ‘The Claverings’ was published in serial form 1866-7. Trollope gives two characters this conversation: “I used to think myself the best lover in the world if I wrote once a month.” “There was no penny post then Mr Burton.”

Elizabeth Gaskell's 'Wives and Daughters' was published 1864-6 but set c.1820: "Mrs Gibson was occasionally inclined to complain of the frequency of Helen Kirkpatrick {her daughter}'s letters {from London to the country}; for before the penny post came in, the recipient had to pay the postage of letters; and elevenpence-halfpenny three times a week came according to Mrs Gibson's mode of reckoning when annoyed, to a sum 'between three and four shillings'.

Later in the book: "Mrs Gibson was busy reading a letter from Cynthia which Mr Gibson had brought from London; for every opportunity of private conveyance was seized upon when postage was so high."

To us, almost a shilling (5 new pence) for a letter seems extremely expensive given how the value of money has fallen over time, no wonder Mrs Gibson was annoyed!  Also, in the mid 1960's the cost of a stamp was 4 old pence, i.e. one third of a shilling, a third of what it was in 1820. These differences are astonishing.

To celebrate the jubilee in 1890 the General Post Office set up the Jubilee Celebration Committee and in 1891 published a book: "Account of the Celebration of the Jubilee of Uniform Inland Penny Postage at the Venetian Chamber, Holborn Restaurant - at Guildhall - at the Museum of Science and Art, South Kensington - and at Various Towns and Villages throughout the United Kingdom."

This section lists the memorials where the subject on this page is commemorated:
Penny Post

We believe this is/was a commercial organisation with offices in Gerrard Street.