Paul Gordon Butt was born on 7 July 1962 and his birth was registered in the Thurrock, Essex, registration district. He was the elder son of Richard A. Butt and Nora A. Butt née Aynge and his younger brother, Neal R. Butt, was born in 1965.

Probate records confirm that his home address had been 4 College Avenue, Grays, Essex, and that when administration of his estate was granted on 4 June 1992 his effects did not exceed £125,000.

This section lists the memorials where the subject on this page is commemorated:
Paul Butt 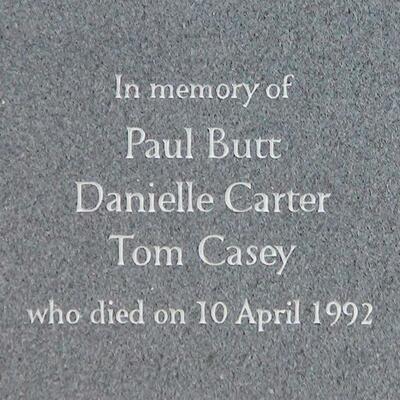 Station Officer -  One of two men (with Frederick Mitchell) who gave their lives at Soho Fire Station on 7th October 1940. London Fire Journal gives his name as William Wilson. See Mitchell for som...

A computer consultant, killed in the Ladbroke Grove rail disaster, aged 25. Andrew Behan has kindly carried out further research: Derek John Antonowitz was born on 7 February 1974 and he came from...