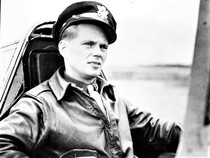 Our Picture source outlines this man's career and confirms that he joined the Royal Canadian Air Force in 1940 and served as a Flight Lieutenant in the Royal Air Force's No.71 (Eagle) Squadron. He transferred to the United States Army Air Force in September 1942 and eventually retired from the USAF in 1962 with the rank of Colonel. He was awarded numerous medals including both the British and American Distinguished Flying Cross.

On 14 August 1952 he married Virginia Cromwell Bertram (1915-2005) in Falmouth, Cumberland County, Maine, USA. His wife was a widow having previously been married to Major George Hurschell McPharlin (1912-1944) a pilot who was killed in action on D-Day, 6 June 1944, over France, having had one daughter.

This section lists the memorials where the subject on this page is commemorated:
Oscar Hoffman Coen

Serjeant John Copping was born in 1880 in Hacheston, Suffolk and his birth wa...

Born Melbourne, Australia but the family returned to Scotland when he was 5 ....