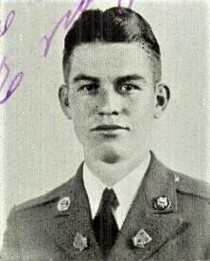 Lieutenant Colonel Gilmore Cecil Daniel was born on 30 November 1917 on the Osage Indian Reservation, Skiatook, Osage and Tulsa County, Oklahoma, USA, the elder son of Pearl C. Daniel (1898-1969) and Nettie Blanche Daniel née Flippen (1898-1925). His brother, Marquis Eugene Daniel (1920-2018), was born on 19 February 1920 in the same town. He attended the Oklahoma Military Academy and it was from their 1938 year book that our image was obtained.

He was finally transferred to No.71 (Eagle) Squadron and on 13 October 1941 he was shot down by Messerschmitt Bf 109 aeroplanes whilst flying his Supermarine Spitfire Mk Vb aeroplane, serial number AD112, and baled out over the English Channel where he was adrift until 16 October 1941 when he was captured in Calais, France and taken to a hospital in nearby St Omer to be treated for small shell splinters. From the 19th to the 31st of October he was hospitalised in Lille, France and then as a prisoner of war was taken to Stalag Luft III in Sagan, Lower Silesia, Germany (now Żagań, Poland). He received annual promotions whilst in captivity: Flying Officer on 19 August 1942 and then Flight Lieutenant on 19 August 1943.

He joined the United States Air Force in 1948 as a Technical Sergeant. In the Korean War he flew one tour of duty as an Okinawa-based Technical Sergeant and a second tour as a Second Lieutenant radar-operator in Lockheed F-94 Starfire aeroplanes of 319th Fighter Interceptor Squadron and was awarded a United States Distinguished Flying Cross for a sortie on 4 August 1952.

By 1958 he was piloting North American F-86D Sabre aeroplanes in the 512th Fighter Interceptor Squadron during the Lebanon Civil War, covering US Marine landings and then became a Base Operations Officer in Beirut.

In Vietnam in 1966-67 he was a Staff Officer directing covert operations and was awarded the Bronze Star. He retired from the USAF in 1969 and died, aged 74 years, on 4 September 1992 in Tulsa, Oklahoma, USA. His body was buried in Osage Garden Cemetery, 2254 W Rogers Boulevard, Skiatook, Oklahoma.

The American War Memorials Overseas website states that he retired holding the rank of Lieutenant Colonel, whereas the American Air Museum in Britain website claims his highest rank was as a Major. We have chosen to use the Lieutenant Colonel rank as that is how he is described on his gravestone. There is also much confusion as to his date of birth. From the RAF Commands Archive website we learn that "Gilmore Cecil Daniel, who flew in six different RAF squadrons including the 242 RCAF squadron commanded by the famous legless fighter pilot, Douglas Bader. Daniel was the "Baby" of the squadron because of his youthful good looks. When he enlisted in the RCAF in December 1939, he already had a pilot's civil license. He gave a false birth certificate showing he was born on the Osage Indian Reservation in Oklahoma, November 30 1921. Therefore, his age would be 18 on enlistment! Subsequent investigation after the war, the Osage Indian Agency showed that in fact he was born November 30 1925. Therefore, he was 13 when he got his pilot's license from Spartan flying school in Tulsa and 14 when he joined the RCAF. His parents were of the Osage Indian tribe, with Cherokee, Choteau, French and Irish blood. A distant cousin to his father was Maj. Gen. Clarence L. Tinker, killed at the Battle of Midway, and for whom Tinker AFB is named". Again, we have chosen to use the year shown on the gravestone.

This section lists the memorials where the subject on this page is commemorated:
Gilmore Cecil Daniel