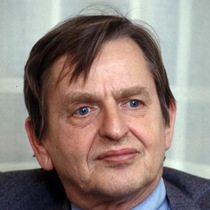 Swedish politician, statesman and Prime Minister (1969-76). Born Stockholm. 1986, late one night he and his wife were walking home from the cinema when he was shot in the back and died. No one was convicted of his murder.

2019: 'The Man Who Played with Fire: Stieg Larsson's Lost Files and the Hunt for an Assassin by Jan Stocklassa was published. Larsson (who died 2004) was obsessed with the case; collecting material, theorising and looking for evidence.

This section lists the memorials where the subject on this page is commemorated:
Olof Palme

Dedicated to the memory of Olof Palme, leader of the Swedish Social Democrati...