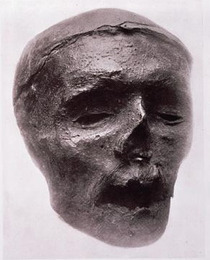 Born Huntingdon, the great-grandson of Richard Cromwell who was Thomas Cromwell's nephew. The picture source website also provides these words: "Following the traumatic upheavals of civil war and regicide, he rose from the ranks of the minor gentry to become Lord Protector and ruler of England, Scotland and Ireland, enjoying the powers - if not the title - of king." Died after a short illness at Whitehall and was buried quickly in Westminster Abbey. Then a funeral modelled on that of James I's was prepared, and on 23 November the procession and ceremony took place.

Following the restoration of the monarchy, and a House of Commons vote on 4 December 1660 it was decided that the bodies of Cromwell, Henry Ireton and John Bradshaw should not be allowed to rest in peace. What follows is just one version of many....on 26 or 28 (depending on source) January 1661, the three corpses were dug up and taken to the Red Lion Inn in Holborn. On the 30th, exactly 12 years after the death of the King, they were taken and hanged at Tyburn gallows. Cromwell's head was then removed, impaled on a spike and displayed on the south end of Westminster Hall for almost twenty years. A convoluted story involving fairgrounds and dinner parties has it eventually being donated to Cromwell's Cambridge college and buried in an unmarked grave in 1960. Another story has a body switch with Cromwell's being buried in the family vault in Newburgh Park, Yorkshire.

Similar post-death indignities were inflicted on others involved in the regicide, or even just related to Cromwell, such as his mother.

From Cambridge University Library: Since his death "the controversy surrounding his extraordinary career has divided professional historians and the general public alike. Some see Cromwell as the defender of principles and liberties, the champion of religious diversity and toleration, while for others he was nothing more than a tyrant, a murderer and a bigot."

2014: The Guardian reports on an early case of plaque pilfering. A bronze plaque buried with Cromwell in September 1658 was exhumed along with the mouldering body and purloined by the man carrying out this unpleasant task, James Norfolke. The article gives the history of the plaque right down to its entry for auction at Sotheby’s on 9 December. It also adds a grim detail to Cromwell's already gruesome postmortem story - Cromwell's facial wart has survived and is held (gingerly, we bet) by the Society of Antiquaries of London.

This section lists the memorials where the subject on this page is commemorated:
Oliver Cromwell