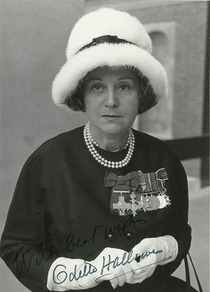 Born Odette Marie Céline Brailly in France.  Married an Englishman, Sansom, in 1931 and moved to England.  He enlisted in 1940 and she in 1942 with Special Forces of the First Aid Nursing Yeomanry (FANY) and Special Operations Executive.  She went to Nazi-occupied France and worked with the French underground, supervised by Peter Churchill.  Playing the roles of a married couple they were arrested and sent to separate concentration camps.  They were both tortured and condemned to death but both survived.  Following the war her marriage to Sansom was dissolved and she married Churchill in 1947.  In 1956 she divorced Churchill and married Geoffrey Hallowes, also an officer in SOE.

This section lists the memorials where the subject on this page is commemorated:
Odette Hallowes, GC