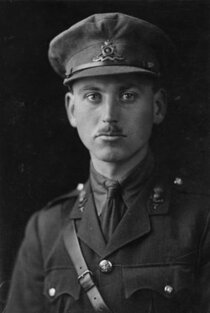 Lieutenant Osmund Bellamy was born in 1891, a son of William Charles Bellamy (1857-1949) and Alice Mary Bellamy née Bayton (1857-1947), his birth being registered in the 2nd quarter of 1891 in the Reigate, Surrey, registration district. His father was a higher grade clerk at the Post Office Savings Bank. The 1891 census taken on 5 April 1891 shows his family living at 1 St Mary's Road, Reigate, but does not list him, so he must have been born after this date.

The 1901 census shows him living at 'Dunluce', Marshalls Road, Sutton, Surrey, with his parents and three older sisters: Irene D. Bellamy (1880-1969), Winifred Bellamy (b.1882) and Violet Bellamy (1885-1951). In the 1911 census he is shown as an architect's assistant living at 'Saxtead', 25 Dunmore Road, Wimbledon, Surrey, with his parents, his elder sister, Violet, who was a photographer's assistant, together with a female general domestic servant.

He enlisted as a gunner in the Royal Field Artillery, service number 1782 and entered France in March 1915. His service number was changed in 1917 to 950655 and he was subsequently commissioned as a Second Lieutenant. Promoted to Lieutenant, he was killed in action, aged 26 years, on 21 March 1918 and as he has no known grave he is commemorated on Stone 7B of the Pozieres Memorial, Ovillers-la-Boisselle, Somme, France.

This section lists the memorials where the subject on this page is commemorated:
O. Bellamy

Served in the Scots Guards

A member of the British Parliamentary Mission to China in 1942. In December 1...