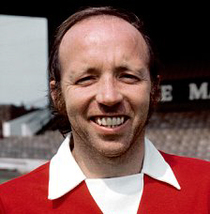 Football player and manager. Born Norbert Peter Stiles in Collyhurst, Manchester. He played for Manchester United, Middlesbrough, Preston North End and was in the winning England team in the 1966 World Cup. After his playing career ended, he managed Preston North End and West Bromwich Albion, with a stint in between as manager of the Vancouver Whitecaps in Canada.

He was awarded an MBE in the 2000 New Year Honours List for services to Association Football.

He died, aged 78 years, on 30 October 2020 after suffering with prostate cancer and dementia.

This section lists the memorials where the subject on this page is commemorated:
Nobby Stiles

The joint (along with Scotland) oldest national football team in the world. I...

Athletics club. It was formed at a meeting in the Vivian Hotel in Peckham Rye...