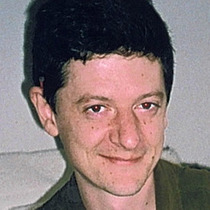 Aged 33, killed by a left-turning lorry, leaving his girlfriend and 19-month-old daughter. A set builder on photo shoots for magazines. Cycling from his studio in Hackney to a nearby hardware shop, he stopped at the red lights in Kingsland Road and was hit by the lorry as it turned left into Whiston Road. There was a short cycle lane before the corner and a cycle box (ASL) at the lights.

June 2010, the Evening Standard reported: "Mr Donald's legal team accepted 25 per cent 'contributory negligence'. Footage showed him undertaking a bus by riding on the pavement before the fatal crash." His partner and child were awarded damages of£337,500.

Andrew Behan kindly found the Evening Standard article and supplied this research: Ninian Fraser Donald was born on 16 May 1973. He worked in the art department on the 2000 film 'The Nine Lives of Thomas Katz' and electoral registers for 2003-2005 show his address to have been 384, Queensbridge Road, London, E8 3AR, Living together with his partner, Kate Everden, their daughter Ava Rose was born and her birth was registered in October 2006 in Hackney. He died, aged 33 years, as a result of a road traffic collision when he was riding his pedal cycle in Kingsland Road, London, E2 at the junction with Whiston Road. His partner subsequently received £337,500, in damages from the driver of the lorry, Bernard Madden.

This section lists the memorials where the subject on this page is commemorated:
Ninian Donald