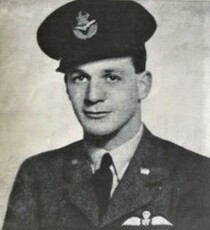 United States Federal Census returns show that in 1930 he was living in Manhattan, New York, USA and in 1940 in Chicago, Illinois, USA.

He joined the Royal Air Force Volunteer Reserve, service number 87008, serving as flight lieutenant and according to the American Air Museum in Britain website he was one of the first named members of No.71 Squadron. When the squadron was re-equipped with the Spitfire Mk IIa he was part of their first operational mission on 17 August 1941.

In the 3rd quarter of 1941 he married Phyllis Maud Nutt in the Kensington registration district. He was Mentioned in Dispatches, promoted to Squadron Leader and transferred to command No.222 Squadron. He was reported missing believed killed, aged 31 years, on 29 June 1942 when flying a Spitfire Mk Vb, serial number AR369, failed to return from an operational flight over Northern France. As he has no known grave he is commemorated on Panel 65 of the Air Forces Memorial at Runnymede, Egham, Surrey.

This section lists the memorials where the subject on this page is commemorated:
Newton Anderson

Anarchist and union organiser. Born Germany. Went to Paris in 1893. Came to L...

Statesman. Born Debden. As a Protestant dissenter he failed to secure the adv...