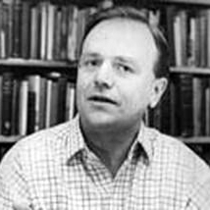 Minister and housing campaigner. Born Bruce Henderson Kenrick at 14 Poulter Road, Walton, Liverpool. He practised medicine during World War II and decided to pursue a career as a doctor. While at university he changed direction and studied divinity. After working in the East Harlem Protestant parish project in New York, he returned to Britain and was ordained, settling in the Notting Hill area of London. This was then a far cry from the desirable location of today and he was appalled at the conditions in which some people were living. This led him to found the Notting Hill Housing Trust and eventually Shelter. Father of Ann Kenrick OBE. He moved to Iona and died at the Lorn and Islands District General Hospital, Oban.

This section lists the memorials where the subject on this page is commemorated:
Bruce Kenrick

Peter Cook said this was modelled on "those wonderful Berlin cabarets which d...

From Heritage Images (link now dead): "The Eagle Hut was designed as a centre...