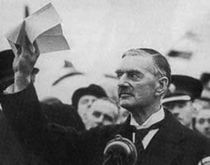 As Prime Minister in September 1938, according to his policy of appeasement, Chamberlain signed the Munich Agreement with Hitler which appeared to avert war by sacrificing the Sudetenland. ('Peace in our time'). After the invasion of Czechoslovakia and then Poland Chamberlain was forced to declare war. In 1940 he resigned as PM in favour of Churchill and 6 months later died of cancer at Heckfield, Hampshire. He is not Britain's most respected PM.

Born in Birmingham. Son of Joseph Chamberlain, also in politics.

This section lists the memorials where the subject on this page is commemorated:
Neville Chamberlain