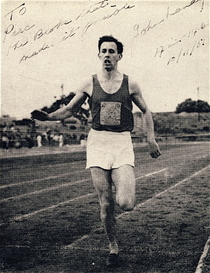 Athlete. Born John Michael Landy in Melbourne, Victoria, Australia. Forty-six days after Roger Bannister ran the first sub-four minute mile, he broke the record again. He is probably best remembered for his performance in the 1500 metres final at the 1956 Australian National Championships, when he stopped and doubled back to check on a fellow runner who had fallen. He resumed running, and in the final two laps made up a large deficit to win the race. Governor of Victoria from 2001 to 2006.

His Wikipedia page and obituaries in the Daily Mail and The New York Times, confirm that he died, aged 91 years, on 24 February 2022 in Castlemaine, Victoria, Australia.

This section lists the memorials where the subject on this page is commemorated:
John Landy

Co-Churchwarden of St Michael &amp; All Angels Church in Bedford Park in 1887.

Duchess of Sutherland and Countess of Cromarty

Active in 1885. Visit the picture source and you will see that Ron Hodgkinso...

Secretary of State for the Colonies 1855.  Born Upper Brook Street.