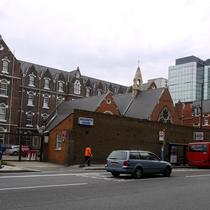 In 1850, Dr. Nicholas Wiseman became concerned about the plight of the aged, orphans and abandoned children in London. He appealed to a recently formed religious order in France which took care of the aged. They responded by sending five members of their order to London, who set up the equivalent of a hostel. In a short time they had taken in so many elderly people, that they had to move to increasingly larger premises, and eventually a purpose built establishment was erected in Hammersmith. The nuns severed contact with France and became known as the Sisters of Nazareth. Gradually similar homes were opened throughout the country, all known as Nazareth House.

This section lists the memorials where the subject on this page is commemorated:
Nazareth House

2019: The Hammersmith and Fulham Historic Buildings Group tell us that this p...

Born Hoxton. Had his office and home at 31 Essex Street at the time of the 1...

Architect. Based in Bristol. He also designed St Jude's in Mildmay and a foun...