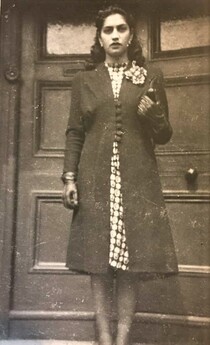 In 1944 she married Raffaele C. V. Falco (1915-1981) in Holborn and their son, Christopher P. Falco was born in 1946, his birth being registered in the Pancras registration district. Her husband had been a woodworker's labourer according to the 1939 England and Wales Register. It would appear that they anglicised their forenames, she became Natalie Angela Falco and he became Raphael Carmen Victor Falco sometimes using the name James Raphael Victor Falco.

Electoral registers from 1945 show them both at 9 Roseleigh Avenue, London, N5 and probate records confirm that he was still there when he died on 28 December 1981. She died, aged 65 years, on 18 November 1987 in the King's Cross Underground Station fire and was cremated on 26 November 1987 in Islington.

Administration of her estate was granted on 3 June 1988 and probate records show her address to have been 86A South Lodge Drive, London, N14. Her effects totalled £113,555. The subsequent fire investigation report described her as a widow.

This section lists the memorials where the subject on this page is commemorated:
Natalie A. Falco

Henry Herbert Gwynn was born in 1899 in Newington, Walworth, Surrey, the youn...

Fredrick Allen Hampton Sr. was an American activist. He came to prominence in...