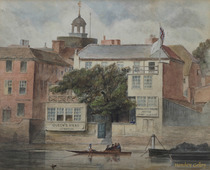 Barnes History has a nice hand-drawn map with a pin showing the location of these Tapestry Works, and it gives the history of the site. John Dee (1527 -1608) lived in a house on this site (with a large and important library) from 1566 until his death by which time he was very poor. In 1619 the estate was purchased and repurposed as the Mortlake Tapestry Works which employed skilled Flemish weavers to produce highly valued products. This closed in the early 18th century.

Another excellent source is Panorama of the Thames. This has another image of the river front which makes clear that the Lower Dutch House is the pink building, shown in our image, to the left of the steps down to the river. Our image is centred on the adjacent Queen's Head pub. The picture source website has researched the 'J.Firmston' named in the picture and this dates it to 1871-8. So the Lower Dutch House was still standing then.The name suggests there was another, upper, 'Dutch House' possibly standing further back from the river. 'Dutch' presumably came from the language/culture of the people working there.

The tapestries were so successful that Mortlake became famous for this product. The Lady Lever Art Gallery holds a set of the tapestries.

This section lists the memorials where the subject on this page is commemorated:
Mortlake Tapestry Works