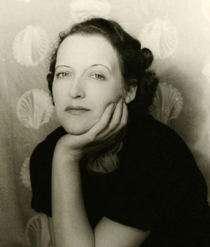 Textile designer. Born on Christmas day, probably at Menlo Park, near San Francisco. She moved to Paris where she met and subsequently married the artist Edward McKnight Kauffer. At the outbreak of World War I, they moved to London, where she achieved fame in creating batik textiles as well as printing on silk, linen and velvet. She produced designs for the London Underground, The Savoy and Claridges.In 1940, she and Kauffer moved to New York City. Here she developed wallpaper and carpet designs. Following Kauffer's death, she retired to Tangier, Morocco, where she remained until her own death.

Do do a Google Images search on her name - you get a page of magnificent Art Deco designs.

This section lists the memorials where the subject on this page is commemorated:
Marion Dorn

Organ builder. Born Germany. Came to England in about 1660. Known as Fathe...

Goldsmith. Born in London to Huguenot parents. Business address from 1760 i...