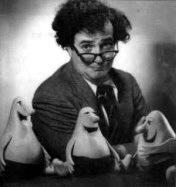 The artist Carrie Reichardt is part of this group, probably its main artist, ...

Comedian, one half of Morecambe and Wise.  Born Leeds. Died Nuffield Hospital...

Comedian and Water Rat.  Born Bernie Weinstein.  His brother was the handsome...