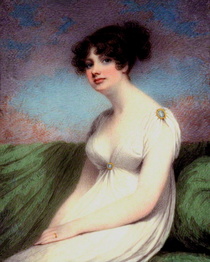 Mistress of Prince Frederick, Duke of York. Born in Ball and Pin Alley, White's Alley, Chancery Lane as Mary Anne Thompson, she married Clarke, a stonemason who became bankrupt. She 'went bad' but managed to become a courtesan (rather than a prostitute) and thus met the Duke who in 1803 set her up in her own home where she led an extravagant life. First she was in Tavistock Place and then moved to Gloucester Place.

The Duke may have been a thrifty man since financial disagreements led Clarke to cause a public scandal. The Duke has to resign as Commander in Chief of the army for a time. Clarke moved to Loughton (where there is another plaque we have not yet collected) and in 1813 was imprisoned for 9 months. On release she moved to France, and died there.

A lot is known about the scandal because in 1809 she issued her memoirs and other publications, and she did not hold back.

Ellen, her daughter with Clarke, was the mother of George du Maurier.

This section lists the memorials where the subject on this page is commemorated:
Mary Anne Clarke