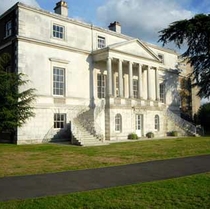 Originally called Bessborough House, it was built by William Ponsonby in the 1760s. It was sold to the Society of Jesus (The Jesuits) in 1861 and renamed Manresa House after the town in Spain where Ignatius of Loyala developed his spiritual exercises. Gerard Manley Hopkins studied as a novice here from 1868 to 1870. It was sold again in 1962, and used for various educational purposes, eventually becoming part of the University of Roehampton and renamed as Parkstead House. It remains a part of the complex of buildings behind the entrance with the plaque.

This section lists the memorials where the subject on this page is commemorated:
Manresa House

The 'SJ' after his name means he was a Jesuit, a member of the Society of Jes...

First name was Thomas but he did not use it.  The first Provost of University...