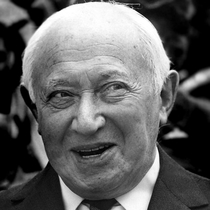 Trades unionist and politician. Born Emanuel Shinwell in Spitalfields. He first entered parliament in 1922. He campaigned for Britain to support the Popular Front government in Spain against Franco in the Spanish Civil War, and during a heated House of Commons debate, he slapped the face of the Conservative MP Commander Robert Tatton Bower, who had told him to 'go back to Poland', (referring to his Jewish heritage).

In the extremely harsh winter of 1946/47 he was the government minister in charge of the coal supply. The mining industry had just been nationalised and the system collapsed, leaving Britain to freeze. He denied there were problems and refused to assume responsibility, blaming the climate, the railway system, or capitalism generally. The cabinet had to take control away from him, leaving him to become the scapegoat. Created Baron Shinwell, he became the longest lived British peer.

This section lists the memorials where the subject on this page is commemorated:
Manny Shinwell

The plaque was not there when we first visited the site. We have returned sev...

Walthamstow was a  local government district 1894 -1965 when it combined with...