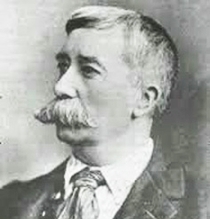 Political activist. Born in Rathniska, near Kilskyre, County Meath. As a teenager he joined the Irish Republican Brotherhood and signed the Fenian Oath. He moved to London in 1875 and worked on Keir Hardie's newspaper 'The Labour Leader'. He wrote several songs, and the socialist anthem 'The Red Flag' is his best known. He wrote the words for it on a train journey, supposedly being inspired by the train guard waving his flag on the platform. Died South London.

Our colleague, Andrew Behan, has further researched James Connell and apart from his Wikipedia page, probate records confirm his address to have been 22a Stonden Park, Forest Hill, Kent and that he died, aged 76 years, on 8 February 1929 in Lewisham Hospital, Lewisham, Kent. He was cremated on 14 February 1929 at Golders Green Crematorium, 62 Hoop Lane, London, NW11 7NL, where his ashes were scattered in their Garden of Remembrance. Probate was granted on 13 August 1929 to Frederick Walshe, civil servant, and to Eric Blackwall, solicitor's clerk. His effects totalled £661-6s-8d.

This section lists the memorials where the subject on this page is commemorated:
Jim Connell

From their website: This is a charity which "Given the free use of Park Lane ...

Organ builder. Born in Newton Burgoland, Leicestershire. He set up business i...

Actress and singer. Born Brighton. Rejected an offer of marriage from Charles...