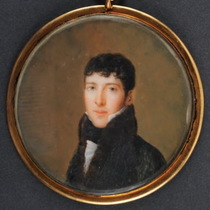 Of the 14th Light Dragoons. Brought the 'Waterloo Dispatch', news of the victory at the Battle of Waterloo, to London. Like many others he had gone, 15 June 1815, straight from the Duchess of Richmond's ball in Brussels to join battle with Napoleon. It is said that when he arrived in London he was still wearing his scarlet dress uniform in which he had attended the ball. But there were 3 days before the Battle of Waterloo and we would have thought that during that time the officers' personal needs, such as changes of clothes, were probably catered for. Strange as it seems to us now, scarlet jackets were standard battle apparel, just look at battle paintings from that time.

Our picture comes from "Waterloo Messenger: The Life of Henry Percy, Peninsular Soldier and French Prisoner of War" by William Mahon.

Number One London is a good source.

This section lists the memorials where the subject on this page is commemorated:
Major Henry Percy