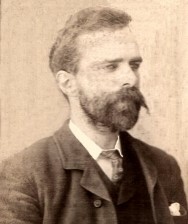 Believed to have assisted Fowler in his work on the Concise Oxford Dictionary.

At Bridging the Unbridgeable Richard Bond has investigated Major Caws. He has found no reference to Caws in Jenny McMorris’ biography of Fowler but he has found a Byron Frank Caws born Seaview, Isle of Wight, 1863, died Jamaica 19 April 1943. He was in the Royal Engineers and co-supervised the construction of the Jamaica Garrison church. Using the pseudonym Ginger he was the author of the Pepper Pot column in the Jamaica Times in the 1930s. His daughter, Miss Phyllis Caws (b.1899), died 4 January 1968. His grandson was Richard Byron Caws.

A correspondent at Bridging the Unbridgeable adds "... a 1934 copy of the Concise Oxford Dictionary of Current English, third edition. In the acknowledgements (by H.W.F.) is the following: “… to all those in the list below I would fain offer – what some of them are no longer living to receive – my heartiest thanks: Leslie J. Berlin Esq.; Major B. F. Caws;…”

Dr. Johnson’s House Trust has suggested that Caws may have been related to Sir James Murray, the primary editor of the first edition of the Oxford English Dictionary.  It’s also possible that Fowler met Caws during his service in the army. Neither option has been proved either way.

We found a reference to the Major in "Religious Upbringing and the Costs of Freedom: Personal and Philosophical Essays", 2010, edited by Peter Caws and Stafani Jones. Peter Caws (1931 - 2020 , born Southall) was University Professor of Philosophy and Professor of Human Sciences at the George Washington University.

We have transcribed a relevant section of that book: "My father was something of a bibliophile, haunting the secondhand bookshops in Paternoster Row in London ... though most of what he bought was sent to his father, the grandfather I never met who lived in Jamaica. Major Caws was a local figure and newspaper columnist in Kingston and an object of veneration on my father’s part; he appeared to live the normal life of a military retiree in the colonies, in spite of having belonged to the {Mennonite} Brethren, and I became aware of some dissonance between the restrictions my father imposed on us and the worldliness he tolerated in his own father."

Online we found a 2-page article written by Phyllis Caws, and interestingly, it's about books.  It begins: "THE WEST INDIA REFERENCE LIBRARY, KINGSTON, JAMAICA The following description was submitted by Miss Phyllis Caws, former research assistant with the West India Reference Library. The West India Reference Library, one of the five libraries of the Institute of Jamaica, contains the most complete collection of material on Jamaica and the British West Indies to be found in the New World, as well as ..."

White's 1878 Directory of Hampshire lists him as pilot living in Sea View, St Helens, however by the time of the 1881 census he was described as a draughtsman, boarding at the home of a Mary Ann Stoddart at 2 Olive Street, Bishopwearmouth, Sunderland. Also boarding at this house was a Peter Grant Tulloh (1858-1939) who was a watchmaker and an elder brother of Elizabeth Tulloh (1862-1923). He was in Sunderland as he was pupil of a distant relative, Francis Edward 'Frank' Caws (1846-1905), who was a Fellow of the RIBA and whose architectural practice was in Sunderland.

The 1891 census shows him as a surveyor living at the Royal Artillery Barracks, Sheerness, Kent, with a female general domestic servant. On the night of the census his sister, Bertha Elizabeth Caws, was visiting him at his home. In the 1st quarter of 1892, he married Elizabeth Tulloh in the St Neots registration district, Huntingdonshire. She was a schoolmistress and they had six children: Maxwell Byron Caws (1893-1977) was born in Sheerness, Eric Ewart Caws (1895-1985) was born in Bermuda, Phyllis Olivia Brook Caws (1898-1968) was born in Dover, Kent as was Geoffrey Tulloh Caws (1900-1990), Alfred Richard Brook Caws (1903-1961) was born in Eltham, Kent and Margaret Joan Adeliza Caws (1907-2000) was also born in Eltham, Kent.

On 5 April 1892 he was elected as an Associate Member of The Institution of Civil Engineers where he was shown as being employed in the Civil Service Department of the Royal Engineers. Kelly's 1899 Kent Directory lists him at 15 Harold Terrace, Dover, He was still living there at the time of the 1901 census where is occupation is described as 'Assistant Surveyor Civil Staff for Engineer services of the Army' together with his wife, four of their children: Maxwell, Eric, Phyllis & Geoffrey, a female general domestic servant and a nursemaid.

Electoral registers from 1905 show him listed at 14 Westmount Road, Eltham, Kent. On 1 April 1907 he was appointed as an Honorary Major and Inspector of Works for the Royal Engineers in Jamaica.

When their eldest son, Maxwell, joined the Army in the Non-Combatant Corps on 14 March 1916 the family address was recorded as 38 Clovelly Road, Ealing. At the end of the war, he was awarded the British War Medal 1914-1918 and the Victory Medal.

Andrew also found a surprising item in a local Isle of Wight newspaper dated 27 November 1920. It's posted on Ancestry.co.uk by Richard Parlour. Here's the item:

"INTERESTING NEWS FROM JAMAICA The following cutting from a Jamaica paper will be interesting to many in this locality to whom Major Byron Frank Caws is well known. The son of the late Mr. Alfred Richard Caws and Mrs. Caws, of Douglas House, his boyhood days were all spent in Seaview, and after leaving the locality he frequently came to visit his parents and other relatives. A gifted man, he has made good use of his talents and distinguished himself by his excellent work. We congratulate him on his last achievement and very heartily wish him continued success in his work. "From nine o'clock today to noon to-morrow the Island address to His Royal Highness the Prince of Wales will be on view in the Lecture Room of the Institute of Jamaica. The address is in three sheets, the first having a border with roses as the motif, the Royal Arms (labelled for the Prince of Wales) at the top and the Jamaica Arms on the left hand or dexter side, as it is called in Heraldy ; on the second sheet the border is very similar but with pomgrenates instead of roses, a little water colour drawing of King's House at the top and the Prince of Wales' feathers on the left hand side. The third sheet differs altogether in design, the border having a panelled effect with a map of Jamaica at the top and four small vignettes of Jamaica views—the four which appears on the cover of Mr. Cundall's Jamaica in 1920," having been selected. The address is written and illuminated in gold and colours on vellum, and is the work of Major B. F, Caws, whose skill in this direction cannot be easily matched in the island and which affords the spectator a delightful aesthetic treat. Everybody should take the opportunity of visiting the Institute and having a view of the address. The amount of labour in the address may be judged when we say that Major Caws informed a Gleaner' man that the borders of the three sheets contained in the several back grounds well over 35,000 separate dots. If anyone disbelieves it they have the opportunity of counting them. We understand that this is the third address Major Caws has done for members of the Royal family, the others being one for Queen Victoria in 1897, and the Coronation address for King George in 1911."

So it seems the Major was a man of varied interests and activities: the army, architecture, engineering, newspaper columnist, books, religion, calligraphy, and, apparently, lexicography.

If you can provide any further information, especially relating to his work with Fowler, please contact us, and Richard Bond.

This section lists the memorials where the subject on this page is commemorated:
Major Byron F. Caws

We are grateful to Rambissoon’s daughter, Meera, who told us that her father ...