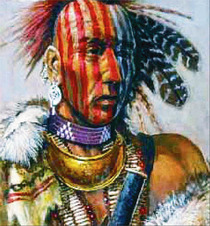 A Mohegan Sachem (chief), grandson of Sachem Oweneco and well-educated, writing several languages including English and Latin. The Mohegans became allies of the English, helping the first settlers in New England survive the bitter cold and repel Indian attacks. But the English began to steal tribal lands. Queen Anne’s Commissioners granted the return of Mohegan lands by an order of 1705 but this was ignored by the Connecticut government. Mohomet sailed to London in 1735 with three supporters to petition King George II for the return of the stolen lands.  While awaiting an audience, Captain John Mason and Weyonomon contracted smallpox and died. Weyonomon died in Aldermanbury in the City of London but foreigners could not be buried in the City, so he was carried across the river and buried near St Saviour’s Church, now Southwark Cathedral.  The exact location of the grave is unknown.

This section lists the memorials where the subject on this page is commemorated:
Mahomet Weyonomon

Our picture comes from a nearby information board and shows Mohegan-Pequot fo...