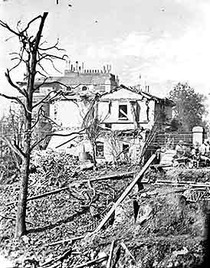 From London Gardens Trust: "The bridge over the Regent's Canal to the north west of the Park was originally called North Gate Bridge but was re named in honour of Lord Macclesfield, the Chairman of the Regent's Canal Company, who steered it through a financial crisis during its construction.

In the early hours of October 10, 1874 the barge Tilbury was third in a train of vessels being towed by a steam tug westwards along the Canal. It was laden with sugar, nuts, two or three barrels of petroleum and five tons of gunpowder. The gunpowder caught fire, causing a huge explosion, as the barge went under the Macclesfield bridge. The crew were killed, the bridge destroyed and windows were blown out a mile away. It also destroyed the nearby house of the painter Alma-Tadema, who was fortunately away at the time. The explosion caused such havoc that a detachment of Horse Guards were brought in to help keep order and to ensure safety from wild animals at the Zoo. The bridge was rebuilt in 1876, using the original iron columns."

Note: the date (10th) given in this text (which we found on a number of websites) conflicts with that on the plaque (2nd). We found another independent source for 2nd and suspect that 10th came from a confusion between the month number and the day number.

2019: Via Facebook Ivan Demrak wrote: "The London Evening Standard gave a report in page 2 of its edition on 3 October 1874." which confirms the date on the plaque.

This section lists the memorials where the subject on this page is commemorated:
Macclesfield Bridge explosion