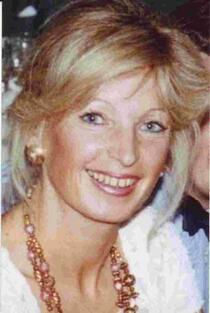 She was employed by the Risk Waters Group and was the firm’s longest serving member of staff, having joined their financial services business at its London office in 1989, and was their North American advertising manager at the time of her death.

She was transferred to the company’s Hong Kong office in 1995 where she met Neil Cudmore when he was also moved there in the following year. In January 2000, they were posted to the New York office and in July 2001 had bought a house in Port Washington, Long Island, New York. The week before the terrorist attack they announced their engagement in Las Vegas, Nevada. They also owned a house in Netherbury, Dorset, and had planned to get married in 2002. They intended to adopt a child to raise in addition to her existing daughter, Zoe Louise Webster, (b.1974).

She died, aged 50 years, whilst they were both attending a Risk Waters Group conference that was being held on 11 September 2001 at 8.30am in the Windows on the World Restaurant on the 106th Floor of the North Tower, 1 World Trade Centre.

This section lists the memorials where the subject on this page is commemorated:
Dinah Webster

The following information primarily comes from the Royal Borough of Windsor a...