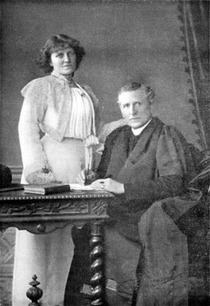 Daughter of J.J.H. Septimus Pennington, Rector of St Clement Danes who sits beside her in the photo. On his death her husband, William Pennington-Bickford, took over as Rector there. The church was bombed in May 1941 and William died, it is said, as a result of the shock. Unable to live without her husband Louie jumped from an attic window in September 1941.

Londonist tells us that we owe the survival of the nearby so-called 'Roman' bath to William. In 1922 it was threatened with demolition and, convinced of its antiquity, he bought it for £500, and the rest is history, only not as ancient as he thought.

This section lists the memorials created by the subject on this page:
Louie Pennington-Bickford

The St Clement Danes Church referred to is the one in the middle of the Stran...

Methodist active in the 1920s.