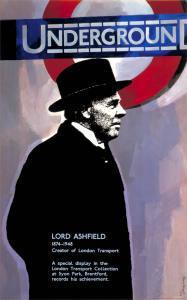 {Inscribed in the stone below the medallion:} The Rt Hon Lord Ashfield PC, 18...