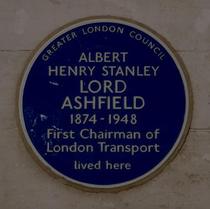 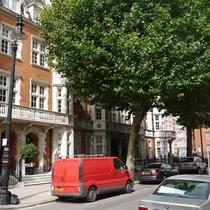 2020: This house was up for sale and the estate agents noted that Ashfield lived here 1918 - 1940. They add "The home hosted key meetings in the run up to the Second World War when Lord Ashfield and senior members of Neville Chamberlain’s Government planned the “Underground Downing Street” for the War Cabinet at disused Down Street Tube station. He personally oversaw the top secret conversion work, walking from South Street where his home’s principal rooms were often filled with complicated floorplans of London’s vast underground rail network. The subterranean complex was ready in late 1939 and it was used by Chamberlain and later Winston Churchill, and had the codename “The Barn”. It eventually became redundant when the Cabinet War Rooms under Whitehall became fully operational in 1940."

The estate agents say the house "was built by J.J Stevenson in Queen Anne revival style between 1896 and 1898."

This section lists the subjects commemorated on the memorial on this page:
Lord Ashfield - W1

This section lists the subjects who helped to create/erect the memorial on this page:
Lord Ashfield - W1

This hall was built on ground donated to St John Ambulance by Edward Bostock ...

In the photo the memorial is partly hidden by the rubbish bin.

Shelley lodged here after he was expelled from Oxford.