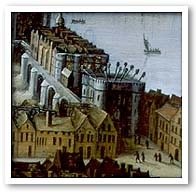 Traitors’ heads used to be displayed on spikes on London Bridge, at the Stone Gateway on the south bank.  This merry London ritual began in about 1300 and continued until about 1660.  The lofty heads included, at different times, those of William Wallace, Thomas More, Bishop John Fisher and Thomas Cromwell, though we doubt the passer-by could have recognised individuals; the heads were dipped in tar as a preservative so facial recognition must have been impaired.  At one stage 30 heads were counted on the Gateway.

Some sources use the word ‘pike’ rather than ‘spike’ to described the head display utensil, thus specifying an infantry weapon with a pointed steel or iron business end on a long wooden shaft, rather than just any old sharp point.  The pike was certainly in use throughout the period and it seems likely that these implements would have been conveniently at hand for head impaling and display purposes.

This section lists the memorials where the subject on this page is commemorated:
London Bridge head spikes

Senior Assistant 4th Engineer on the RMS Titanic. A full résumé of his life c...

During the London blitz, people sheltered on the platforms of many undergroun...